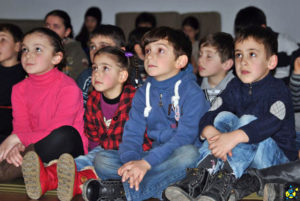 Since 2013 the CCFYD Foundation has cooperated with the International Film Club for Children ‘The Magic Lantern’ and implemented two Magic Lantern clubs in Georgia. The two clubs in Rustavi and Zugdidi introduce children aged 6 to 12 to the amazing world of film and film-making by showing and explaining to them high quality films for different ages and from different countries of origin. With children watching movies from a younger and younger age, this scheme gives children a visual media education and access to good films. The Magic Lantern offers a quality leisure activity for children in Rustavi and Zugdidi.

Films to grow up with

With a unique approach and an affordable price of 10 lari for the whole season, The Magic Lantern invites children to discover 9 films during the school year. Children are prepared for the film in several ways: 10 days before each film showing club members receive an illustrated leaflet describing the film. Just before the screening , Magic Lantern’s trained presenters and actors perform a humorous interactive and instructive sketch relating to the film. Without parents yet under the supervision of adult helpers, children become acquainted with the emotional impact of cinema, spend quality time with their friends and develop their «critical eye».