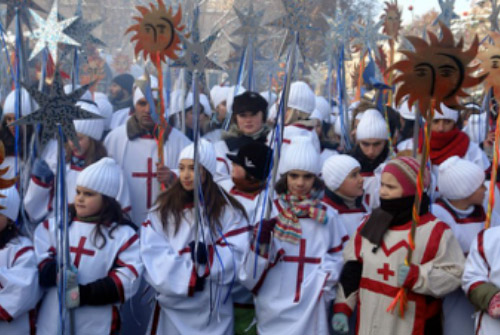 The majority of the Georgian population belongs to the Georgian orthodox religion. As with all Christians, the celebration of the birth of Christ at Christmas is one of the most important religious festivals of the year. However, the Georgian orthodox church does not follow the Gregorian, but the old Georgian (Julian) calendar, which means that Christmas falls on 7 January and not 25 December. All over Georgia on this day parades take place called ‘Alilo’, led by a priest carrying a banner. Old and young take part in these processions, usually dressed as shepherds, soldiers or famous religious figures. The older people give presents to the younger and alms are collected. The Christmas tree also plays an important part in Georgia. But if you are imagining a green pine tree, then you’d be wrong! A Georgian Christmas tree, called ‘Chichilaki’, is made from a hazel branch bound with strips of white bark to look like a tree. It can vary in height from a few centimetres to several metres and is decorated with dried fruits. The tree remains in place until the Festival of the Three Kings on 19 January when it is burnt. The smoke symbolises blowing away all problems of the approaching year. How should you imagine Christmas Day in Georgia? This can vary from family to family and region to region but family, friends and God all play an important role during the festival. Most people take part in an Alilo (parade) and then celebrate with family and friends. A festive meal is eaten and children receive presents. As is customary in Georgia, many different dishes are served, for example a pilau made of rice, walnuts and raisins decorated with jam. Music and song are also an important part of the festivities. The whole day is one of celebration, good food with wine, and conviviality. Something sweet is always appropriate at Christmas so ‘Goziknaki’ is often served. This is a delicious seasonal bake containing walnuts.